Dix-Neuf is a large, brooding mecha-humanoid, even believed to be semi-organic. Most of Dix-Neuf's torso and lower body is covered by a large, dark blue trench coat-like piece of armor. Gunbuster's torso is orange and supposedly fleshy, as the hull of his torso is striped with many scars from previous battles with Space Monsters. When Dix-Neuf's coat is taken off, a bronze carving reminiscent of a Japanese Oni demon lies upon Dix-Neuf's back. This carving is activated whenever Dix-Neuf's pilot achieves their topless form, which will cause blue ethereal flames to burst from the carving's head in the shape of horns, complementing the Oni design and allowing the carving to emit multiple Buster Beams. Dix-Neuf has a set of two long arms, with his left being his organic arm and right being a robotic limb implant, as his right arm was severed in a previous attrition.

Dix-Neuf's head is very humanoid, with a humanoid nose, set of eyes, and mouth. The mouth is covered by a jaw piece made out of a concrete material. The top of Dix-Neuf's head is capped with a helmet reminiscent of the original Gunbuster head. Dix-Neuf's right eye was impaled by part of a Space Monster long ago and the fragment has never been removed since. 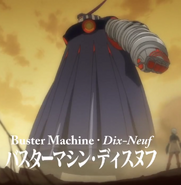 An X-Ray of Dix-Neuf's head, showing the horn blocking its brain cockpit, and its human-like teeth. 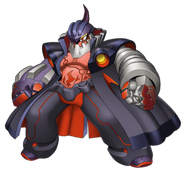 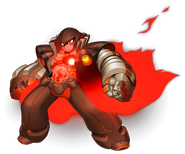