The Eltreum (ヱルトリウム) is a high-tech spacecraft which was used to reach the center of the galaxy for the final battle against the Space Monsters on May 22, 2048. It is the largest manned spacecraft ever built by mankind. Like the Exelion, it was commanded by Tatsumi Tashiro. The ship was originally designed to evacuate Earth if the war with the Space Monsters proved impossible to win, but once their defeat was proven as feasible, the ship was refitted with several thousand weapons, among which were laser cannons and photon torpedoes, 3,800 wings of Cosmo Attack Fighters and 800 Sizzlers. During the battle, it was also escorted by a large fleet, some of which were Exelion-class and their successor, the Super Exelion-class. Unlike its predecessors, which used more conventional propulsion methods, the Eltreum is propelled by the power of pure mathematics and controlled by ESP-enabled humans and porpoises. The ship's armor was made of a man-made substance also known as Eltreum, a material so strong that it was impossible to destroy with conventional methods. The only known thing that could damage Eltreum was its antimatter equivalent, Anti-Eltreum.

In 14,282, the Eltreum and the remains of its escort fleet were rediscovered when the Red Milky Way barrier dissipated. The front of the ship seems to have been damaged by Buster Machine 3's explosion, but the rest of it is unharmed. Another ship of the same class as the Eltreum, known as the Jupiter 2, was placed in its namesake's former orbit and turned into a space colony.

The Eltreum is a large 70km long triangular craft. Since the only episode of the original series it appears in is in greyscale, its true color was unknown until its brief appearance in Diebuster, where it was confirmed to be white. 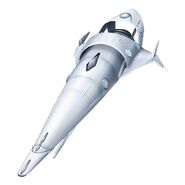 As seen on Super Robot Wars X-Ω
Community content is available under CC-BY-SA unless otherwise noted.