The Exelion (ヱクセリヲン) is a heavily-armed near-lightspeed craft commissioned shortly after the start of the war against the Space Monsters in 2021. It is armed with laser cannons and has an arsenal of 1220 RX-7 Machine Weapons. Tatsumi Tashiro was its captain. Later, the ship was used to destroy a massive Space Monster fleet by imploding and creating a black hole. The black hole swallowed Pluto and its aftershocks destroyed several of Earth's cities, changing its landscape in the process. The black hole was named Exelio, in the memory of the ship. Unfortunately, the black hole didn't destroy the monsters, and instead it merged them into a horrendously powerful monstrosity, which became known as the Fluctuating Variable Gravity Well, which ate the black hole from the inside out.

12,000 years later, the Topless Fraternity fought a brutal battle against the VGW, which escaped from Exelio and used it as its power source. Most of the Fraternity was slaughtered, except for Nono/Buster Machine 7, and her best friend Lal'c, the pilot of Dix-Neuf/Buster Machine 19. The two were able to defeat the monster and destroy Exelio by splitting it in two, at the cost of Nono being trapped beyond time in the process.

The Exelion is a 7205 meter long triangular craft painted blue with red markings. The name of the craft is written on its side both in katakana and the Latin alphabet. The ship's armor is blue, with red highlights, and bears an aerodynamic profile. 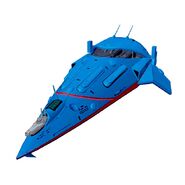