Gunbuster (ガンバスター) is an extremely powerful mecha which is formed by combining Buster Machine 1 and Buster Machine 2, which are piloted by Noriko Takaya and Kazumi Amano, respectively. It appears that Noriko is in control of Gunbuster's movements while Kazumi controls some other more technical aspect of its operation. Because it's made up of two combined machines, it has two degeneracy generators instead of one. The purpose of Gunbuster was first to fight off Space Monsters and later to protect the Exelion, then later in the war, Buster Machine 3 during its transit to the center of the galaxy.

The fully composed Gunbuster stands at 240 meters tall, taking a mecha-humanoid appearance. Gunbuster's torso and head transforms from Buster Machine 1 , containing large, hulking shoulders lined with thrusters for heightened agility and movement. Large cylindrical arms fall from Gunbuster's shoulders. Buster Colliders are encased within both of the arms. Gunbuster's head takes the form similar to that of a samurai's Kabuto helm, adorned with a golden, gleaming crest representing the logo of the Space Admiration. Within the head lies Gunbuster's "Eye", a purple sphere with a single, powerful photon lens in the middle, which can emit a Buster Beam when activated. Gunbuster's lower body (Hip and legs) transform from Buster Machine 2 . From the hips descend large, cylindrical bipedal legs similar to that of Gunbuster's arms. Gunbuster's feet contain caterpillar treads tipped with serrated spikes. The legs can preform the Super Lighting Kick when activated. The whole of Gunbuster's body is colored a pitch black or a deep moonlight blue, tipped and striped in a neon orange.

Gunbuster has a plethora of attacks and moves, all of which Noriko loudly announces, as is proper 80's mecha anime etiquette.

Gunbuster was originally meant to wield tomahawks, but they were cut out of the final release.

*Appears in games, only name shown in original anime. 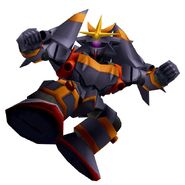 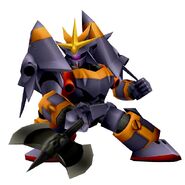 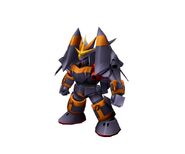 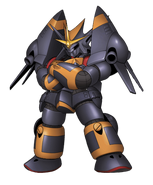