Lt. Commander Koichiro Oota (オオタ・コウイチロウ) is a survivor of the Luxion disaster of 2015. Yuzo Takaya gave his space on the escape shuttle to save Oota. He is Noriko Takaya and Kazumi Amano's coach. At one point during Top o Nerae! Gunbuster, he contracts Space Radiation Sickness and Noriko and Kazumi, unsure whether he is alive or not, fight off an army of Space Monsters in his memory, resulting in arguably the most intense battle of the entire series:

After this, Kazumi and him reconcile their love for one another and get married. He subsequently dies in the following 15 years between then and the completion of Buster Machine 3.

He has long, dark green hair and green eyes which are covered by sunglasses. He has a scar over his right eye. 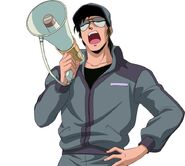