Start a Wiki
Reiko Kashiwara is a student of Okinawa High School for Girls who was jealous of Noriko's special treatment and challenged her to a fight in RX-7 Machine Weapons, which she lost. It was in this challenge that Noriko, who, until recently, could barely pilot an RX-7, was able to do a Lightning Kick with her display switched off.

After graduation, she became a coach at Okinawa High School for Girls. 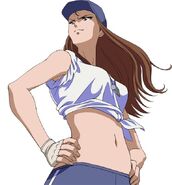 As seen on Super Robot Wars X-Ω
Add a photo to this gallery
Retrieved from "https://gunbuster.fandom.com/wiki/Reiko_Kashiwara?oldid=4652"
Community content is available under CC-BY-SA unless otherwise noted.