Smith Toren is an American pilot who was briefly partnered with Noriko Takaya. He is from Amarillo, Texas.

He has (probably dyed) white and yellow hair spiked up in a Guile-like fashion. He has blue-green eyes. 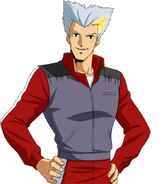 Retrieved from "https://gunbuster.fandom.com/wiki/Smith_Toren?oldid=4971"
Community content is available under CC-BY-SA unless otherwise noted.